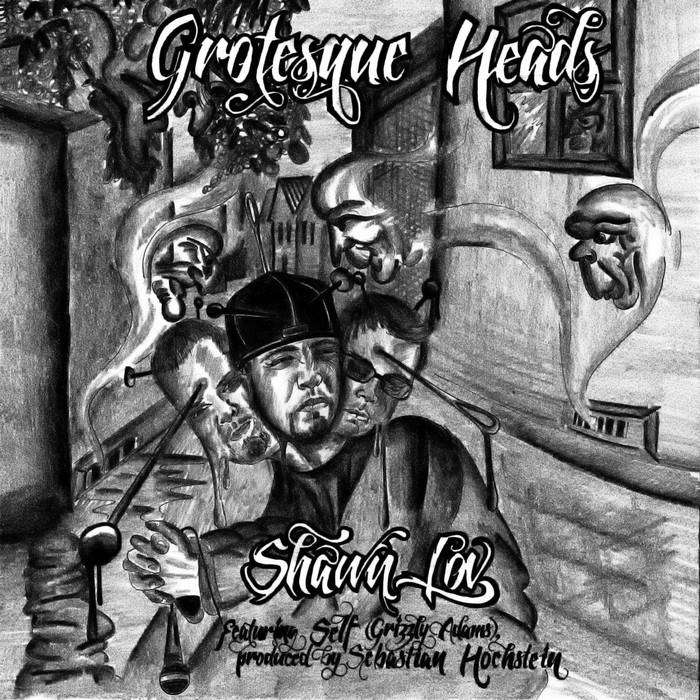 The Grotesque Heads LP is a Long-Play collaboration between Shawn Lov (New Jersey) and Producer Sebastian Hochstein (Germany), featuring Self (Grizzly Adams) and other supporting DJs and artists from Australia, England, and America.

The thirteenth official release in the Shawn Lov catalogue since his debut in 1990, "Grotesque Heads" is a tidy rap package that stands as an expression of mature hip-hop, grounded in the 90's, but transcending eras to meet new listeners with a flavor that is both reflective and progressive. Although the set is composed of only ten songs, which all trend on the short side, the themes of album are expansive. Topics range from the deterioration of Hip-Hop culture in Shawn's home state (New Jersey,) dealing with identity (Hip-Hop) in the corporate workplace, to both white on black and black on white racism.

The "Grotesque Heads" LP, like the drawings by Leonardo Da Vinci the album title references, can be seen as a warped perception of the world as seen by aging Hip-Hop devotees from the 80's and 90's, or as a perfectly accurate evaluation of the topics it surveys. It all depends where you're standing, and how long you've been standing there.

The first few hundred digital copies are being made available to long-time fans for FREE, but $ donations for the album are always appreciated.

NJ based Shawn Lov released his 1st LP in '94 and has been hard at work ever since. Since then he has opened for Mobb Deep, Big Pun, & ODB, appeared on the Jenny Jones Show, collaborated with legendary Hip-Hop producer Tony D, topped the charts of mp3 .com, published books, partnered with NuffSaid and brought his music to an international audience, received praise by Rolling Stone magazine & more! ... more

Bandcamp Daily  your guide to the world of Bandcamp